The Weather bureau was predicting a horror week-end and emergency services were putting out storm warnings suggesting very heavy rainfall. I was procrastinating whether to put a new oil scraper ring in the AJS to get her going for the run.  However, I decided to seek more advice on whether the bike needed one or not.  Consequently, I decided to do back up, given the weather forecast. I considered a social day at Mark’s in his new shed was the likely outcome as doing a ride would be most unlikely.

On the Sunday morning heading to Gisborne the weather looked fine despite the dire warnings. On arriving at Mark’s I was surprised to see thirteen bikes lined up and their riders getting their wet weather gear on. The bikes that were there really surprised me - so many different makes. We had Keith on his JAP special, John on his AJS big port and Paul was on his cammy Velocette. Of particular interest to me was Ian on his newly purchased  Scott, which I had never seen before and Jennifer’s 600cc Douglas that I had seen before, but had changed ownership.

After Mark’s briefing we headed off to Woodend, via the old Calder Highway, no rain in the Black Forest, a great sign for a dry day’s riding. We then proceeded to Hanging Rock, passing the Hanging Rock Racecourse, which I had never seen before and then onto Lancefield for our first regroup and coffee break.  Next stop was Newham for another regroup, back to Woodend, then through the Black Forest where we encountered light drizzle and back to Mark’s at New Gisborne.

All the bikes had performed well - not a bike on the back-up trailer. The only slight problem we had was David’s Peerless suffering belt slip and having to be helped up one of the long hills.

On arrival back at Mark’s we settled in for a well deserved BBQ lunch topped off with a beautiful soup Pat Hunter had prepared for us. A special thank you goes to Faye and Neville who helped Mark prepare for the run and again to Mark for putting on the event.

This was a great event and all who attended thoroughly enjoyed the day. Looking forward to next year already.

Back Up: Denis and Darren Reed-Smith, Chris Weir 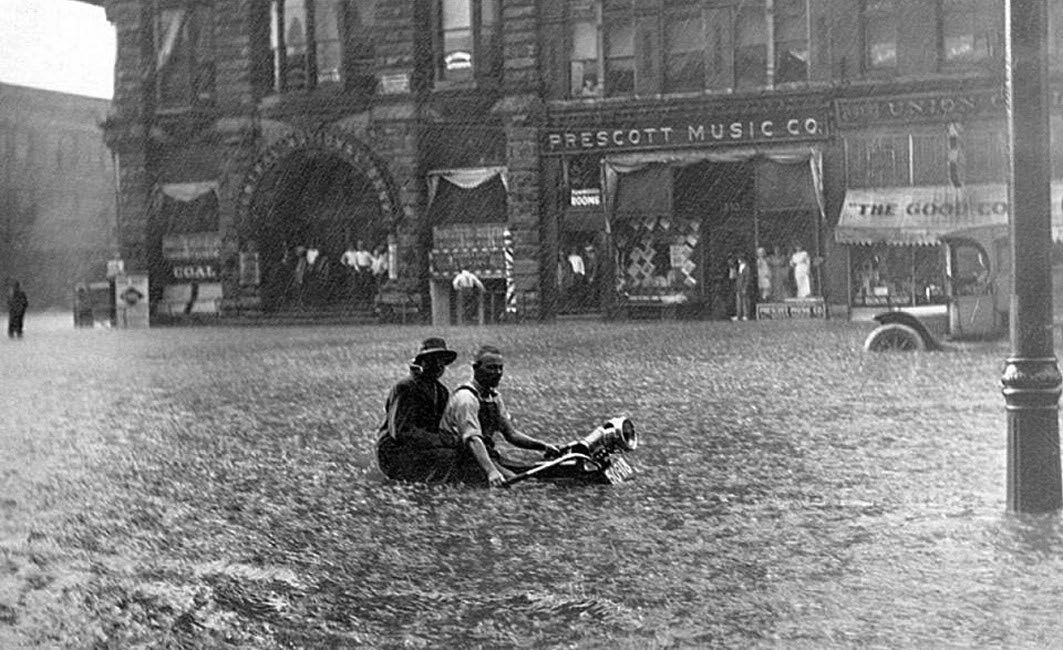 What the Weather Bureau was predicting 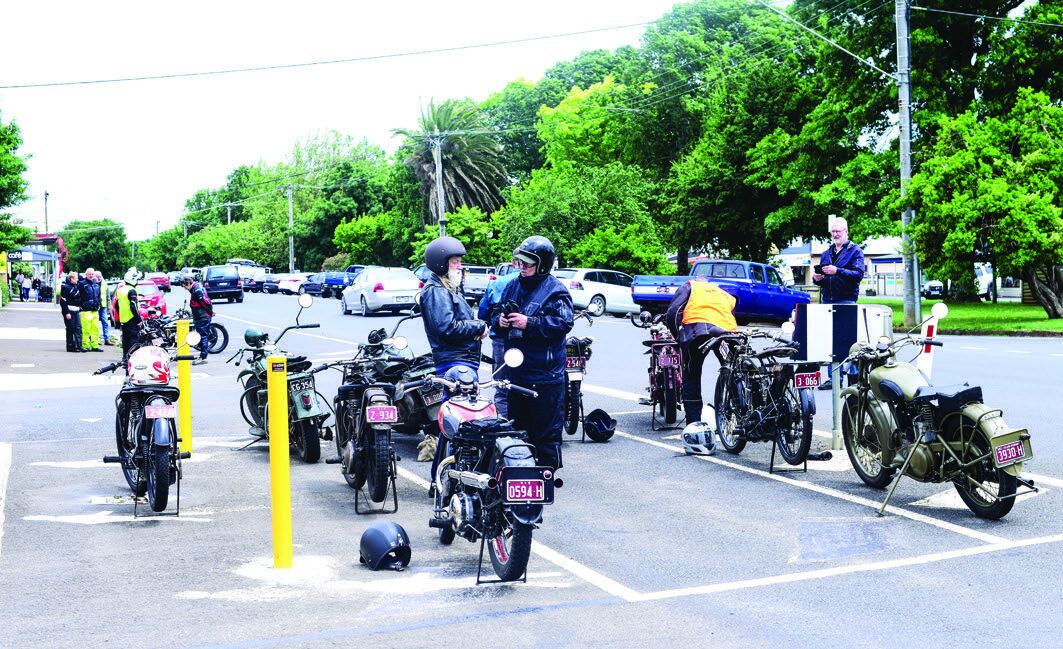 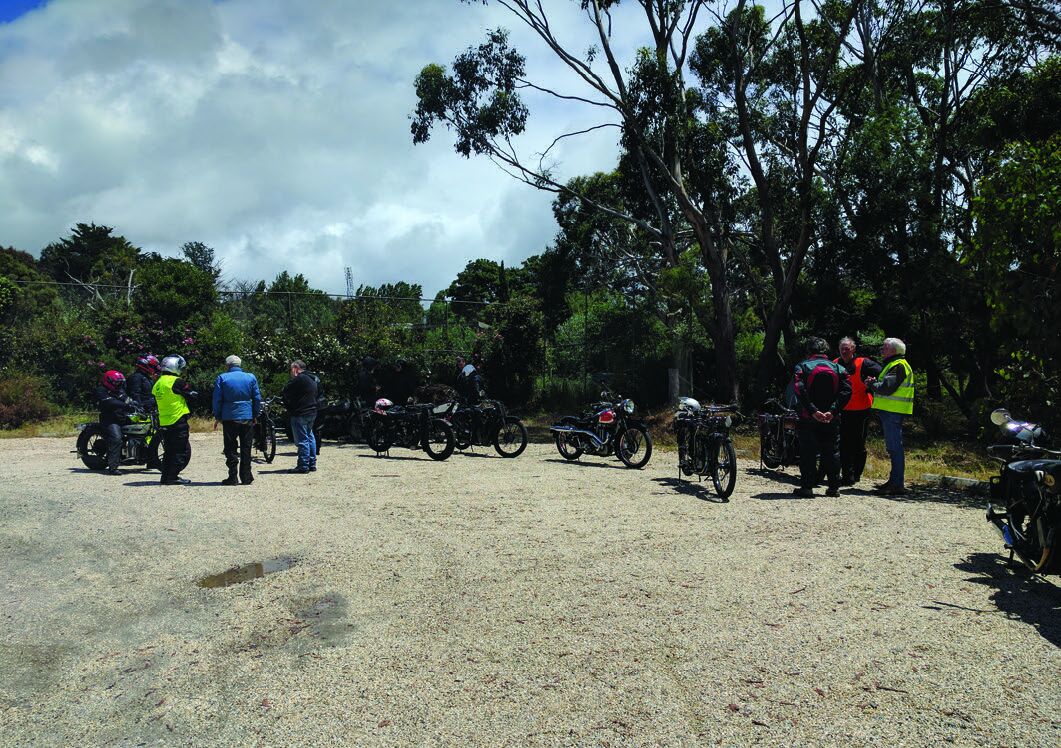 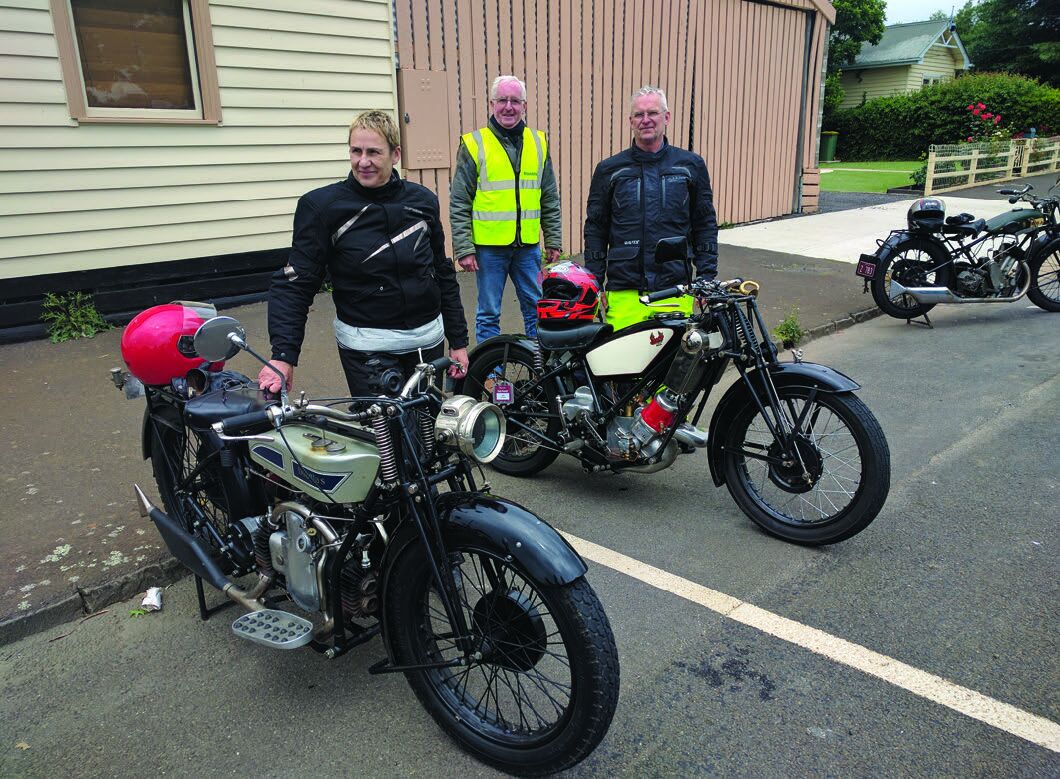 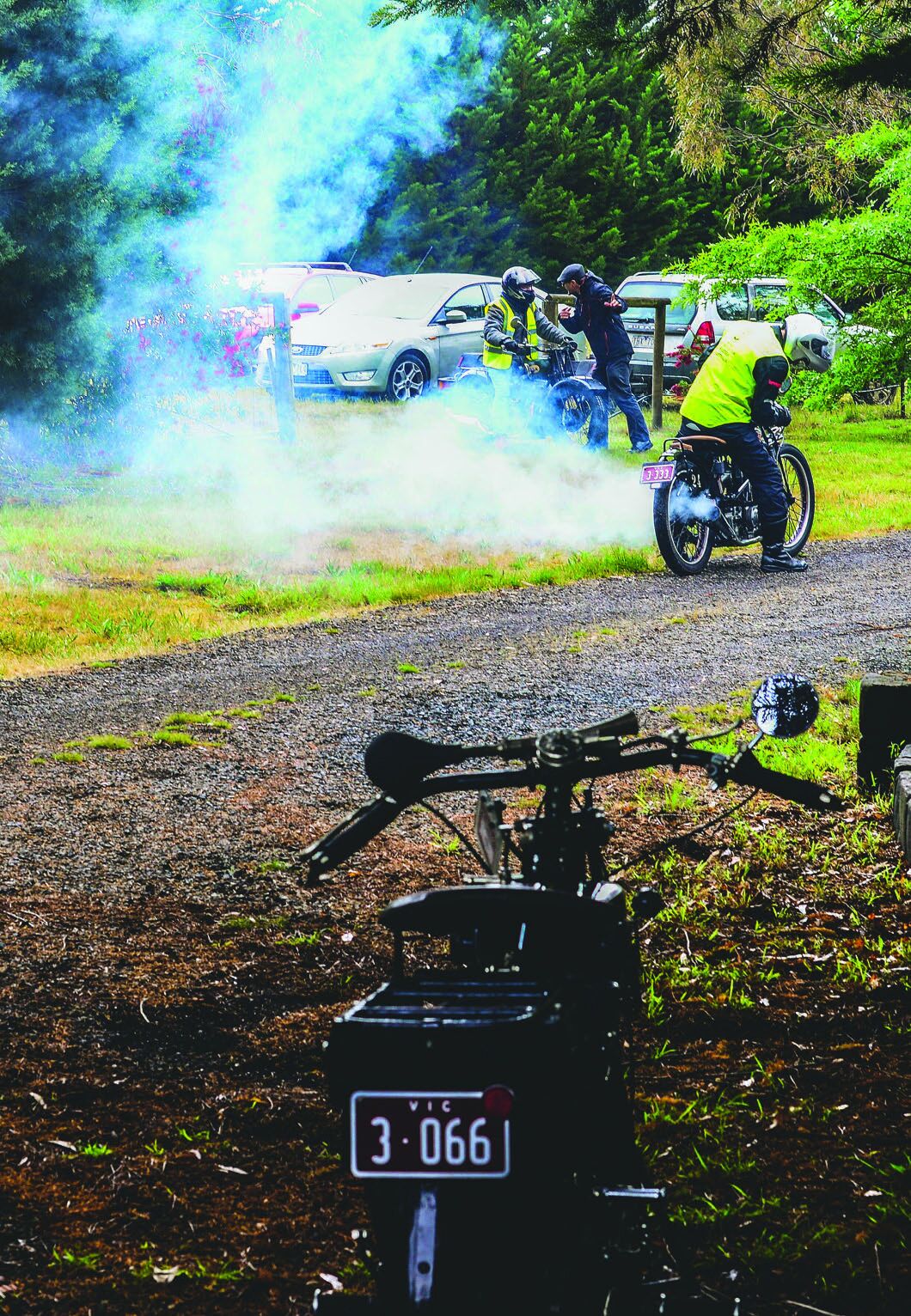 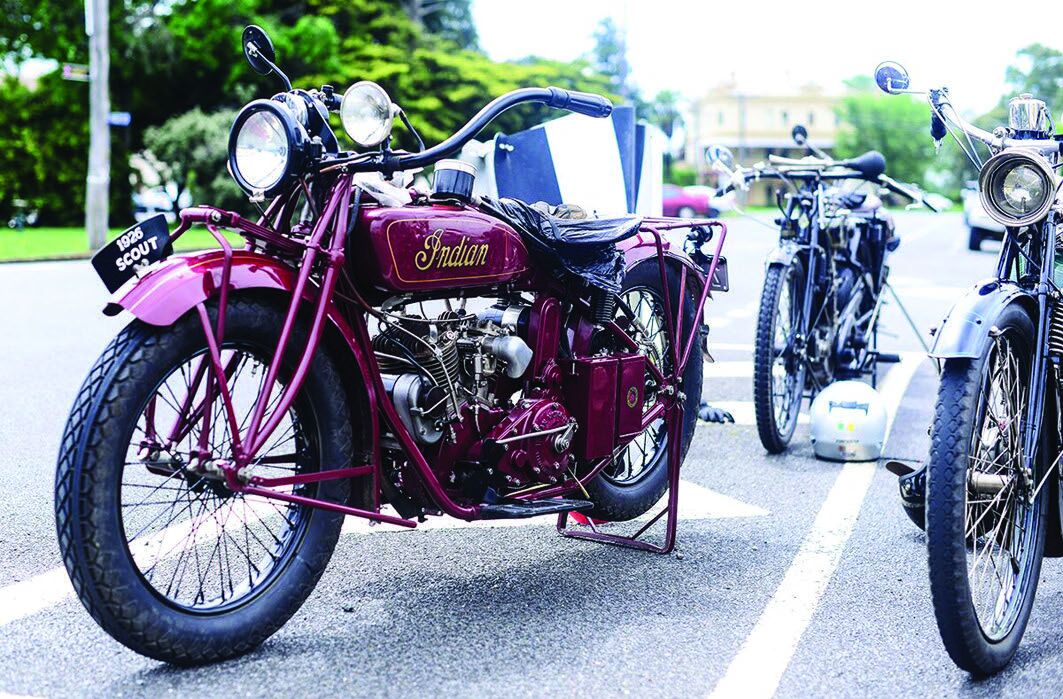 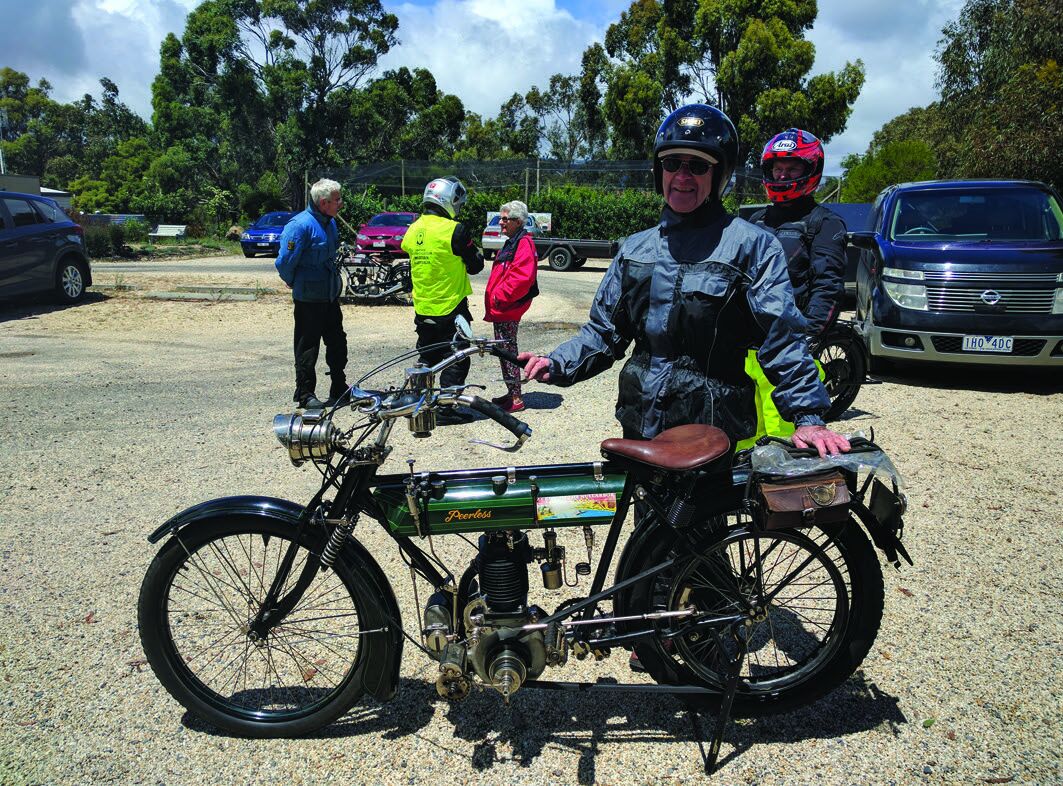